Iovance’s TIL therapies are being evaluated in phase 2 combination trials including checkpoint modulators Keytruda and Opdivo.

۲۰۱۸ will be a critical year of risk resolution, with three key phase 2 readouts on tap.

IOVA’s TIL therapies may prove to have a better safety profile than other cell therapy treatment classes in oncology.

Iovance Biotherapeutics (IOVA) is a $640 million market cap company trading at $8.80 per share focused development of patient-centric cellular immunotherapies. Never heard of it The company recently changed it’s namefrom Lion Biotechnologies, Inc. Strong Bio is forming a bullish investment thesis for the company based upon a recent late-breaking poster from a phase 2 trial in metatstic melanoma presented at SITC– which boasted a 78% disease control rate (DCR)- combined with the market potential of efficacious personalized cancer-directed tumor infiltrating lymphocytes (TILs) in several difficult to treat indications. The company is currently engaged in three separate phase 2 trials to assess safety and efficacy of TILs for treatment of patients with metastatic melanoma, squamous cell carcinoma of the head and neck, and cervical cancer. In addition, IOVA is engaged in patient enrollment and assessing results from several phase 2 combination treatment studies, including checkpoint modulators Opdivo and Keytruda. Additional phase 1 and phase 2 TIL studies will commence in 2017 for indications of glioblastoma, pancreatic cancer, ovarian, non-small cell lung cancer (NSCLC), and sarcoma. The robust early pipeline diagram taken from the company website is shown below: 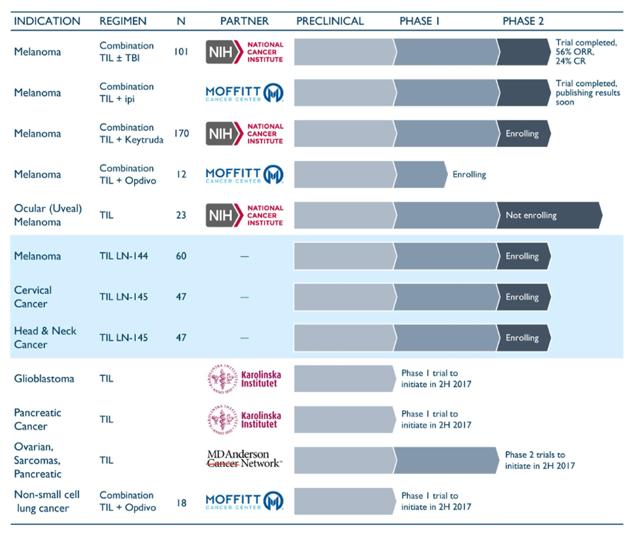 Personalized medicine in the form of adoptive cell therapies are now entering pivotal and submission stages, with FDA having recently approved the second CAR T-cell therapy October 18 for diffuse large B-cell lymphoma — Kite Pharma (KITE), bought out by Gilead (GILD); and Yescarta). Yet these CAR T-cell treatments are not without risks, as patients may develop cytokine release syndrome, resulting in high fever, crashing blood pressure, and neurological issues. Many of these therapies are confirming promising preclinical results in hopes of further oncology breakthroughs, with nearly 50% remission rates, so the reward is greater than the risks. Current oncology cell therapy trials center around CARs, TILs, CTLs, Th cells, NK cells, and Tregs which all have overlapping subsets of patients in promising oncology indications. TILs, the focus at IOVA, are immune cells that have naturally entered a tumor, and their presence indicates an attempt by the immune system to identify and contain the tumor. TIL therapy involves collecting a tumor sample and identifying TILs with the greatest anti-tumor potential. Unlike CARs or TCRs, no genetic modification or engineering is undergone. The TILs are grown and expanded into large populations in cell culture, then activated with cytokines (signaling molecules), before being added back to the patient in large doses. But large doses are not the only way TIL therapy might help the body fight cancers.

If left unchecked tumors eventually grow into different cell types that mutate into a highly heterogeneous population. During initial stages of cancer, TILs infiltrate the area of a tumor and form an anti-tumor response. However, TILs can sometimes be evaded by cancer cells after this initial invasion by the immune system. Cancer cells can undergo changes to avoid detection and even suppress the immune system by releasing various anti-inflammatory factors such as TGF-B into the local tumor microenvironment. This process of “cancer immuno-editing” is often associated with three stages, elimination, equilibrium, and escape which revolves around immune checkpoint inhibition. Monoclonal antibodies targeting programmed cell death 1 (PD-1) receptor or programmed death-ligand 1 (PD-L1), including Opdivo from Bristol-Myers Squibb (NYSE:BMY), Keytruda from Merck (NYSE:MRK), and durvalumab from AstraZeneca (NYSE:AZN), have generated much excitement in the medical community, with their promising patient responses utilizing checkpoint inhibition. IOVA is evaluating mechanisms to attenuate tumor escape responses in combination with immune checkpoint modulators to maximize aggressive anti-tumor activity of TILs. Moreover, it is thought that since genetically unmodified TILs are already present in patients, some unwanted adverse event issues (graft versus host or cytokine release syndrome complications) associated with CAR T-cells might be be avoided using this personalized approach, thus presenting a better safety profile.

FDA has awarded IOVA’s TIL lead candidate LN-144 fast track designation for the treatment of advanced melanoma. In phase 2 clinical trials in patients with metastatic melanoma, Iovance’s LN-144 TIL therapy demonstrated promising efficacy with objective response rates of 56% and complete response rates of 24%. In early data from another phase 2 trial, nine phase 2 study efficacy-evaluable patients a disease control rate of 78%, including four confirmed or likely to confirm patients registering a partial response, was reported. These early results are extremely promising and 2018 should be a pivotal year for the therapy’s approval prospects. For stage 4 melanoma, FDA has as of yet only approved only two drugs, Dacarbazine and high-dose interleukin-2. However, both of these drugs have a range of potentially serious side effects, and successfully treat only a small patient subpopulation. More effective treatment classes are needed to achieve extended patient life span, substantial tumor shrinkage, improved overall survival rate, and yield better safety profiles. IOVA has received CTA approvals in Hungary and United Kingdom for cervical carcinoma. The melanoma therapeutics market is expected to reach $12.4 billion by 2025.

LN-145 is the company’s TIL candidate for cervical oncology. IOVA treated the first patient in phase 2 recurrent, metastatic, or persistent cervical cancer trial in the recent quarter. LN-145 CTA was approved by regulators in the Netherlands and United Kingdom for the phase 2 trial of LN-145 in this indication. The global cervical cancer market for drugs and diagnostics was $11.3 billion in 2012 and is expected to reach $15.6 billion in 2018, reflecting a CAGR of 6.1%. The company also treated it’s first patient in a 47 patient phase 2 trial of LN-145 for head and neck cancer in June of 2017. The global market for head and neck cancer is expected to rise rapidly, from $380 million in 2014 to $1.5 billion by 2024. The company is entering other treatment markets as well in early trials, including glioblastoma, pancreatic, and ovarian cancers.

۳Q 2017 GAAP net loss was $22 million ($0.35 per share), indicating a conservative burn rate estimate of roughly $90 million per year. GAAP Research and development expenses were reported at about $18 million, compared with $9 million for 3Q 2016. Increases were attributed to increased expenses in research and manufacturing. GAAP General and administrative expenses were reported at $4.6 million. 3Q 2017 report indicated the company holds $163 million in cash and cash equivalents. The company raised $54 million at $6.50 per share after completing a common stock offering during Q3 2017. IOVA expects to finish 2017 with $141 million in cash and cash equivalents. Given this cash, the company should have a runway through phase 2 key readouts for 2018 and continuing through mid 2019.

Risks for investing in Iovance Therapeutics include risks of companies that have not received regulatory approval to market a product. Dilution will eventually be a concern as phase 3 trial expenses climb the ramp of larger patient populations. Clinical trial delays could prove to be significant in the somewhat pioneering immuno and cell therapy oncology space, with key concerns revolving around safety. Preparing any cell therapy for large scale manufacturing GMP compliance can also be a potential pitfall. The company is putting a lot of emphasis on its Gen 2 manufacturing process, having improved and reduced the process time to 22 days. The company has partnered with TrakCel to electronically address manufacturing, scheduling, and logistics challenges facing personalized cell therapy. Cryopreservation of the cell product enables easier administration and handling, and minimizes the time a patient must wait for TIL treatment. So although manufacturing delays and obstacles can pose risk, the company is acting early to manage the challenge. Competition in the space is also heating up, with a number of alternative immuno and cell therapy approaches being evaluated by potential rivals in clinical trials. However, the TIL treatment class may prove to have advantages, particularly in meeting safety concerns. Given the fact that many cancer patients do not respond to current front-line therapies, the reward to risk ratio for IOVA (and several other cell therapy oncology companies) seems quite promising.

Iovance may emerge as a leader of novel TIL anti-cancer immuno-cell therapies. Analysts are starting to take notice as well. Six analyst consensus target from Yahoo Finance is 15.92. Iovance received five back-to-back buy ratings in 2H 2017, which translates into even more upside potential if efficacy data reaches across multiple indications. Oppenheimer analyst Mark Breidenbach reiterated his buy rating with a $13 price target. He cites key readouts in during 2018 as being a critical derisking factor for investors. Lead candidate, LN-144, a is highly promising personalized cell therapy for advanced melanoma which has already demonstrated early efficacy and boasts FDA fast-track status. The technology has now been validated in multiple trials at well respected academic institutions. Strong Bio is putting IOVA on the must follow 2018 watchlist and will look to enter positions as opportunities arise. Strong Bio regards IOVA’s LN-144 and LN-145 therapies as having reasonably high odds of being a recipient of FDA Breakthrough Therapy Designation in 2018. Moreover TIL therapies may prove to have one of the better safety profiles compared to other classes of cell therapy such as potentially chronic cytokine release syndrome sometimes associated with CAR T-cell therapy.

Trouble in the Soil Bed: Sex Toys for Plants