EPFL researchers have used electrochemical imaging to take a step forward in mapping the distribution of biomolecules in tissue. This technology, which uses only endogenous markers – rather than contrast agents – could be an alternative to current cell imaging techniques.

In the field of theranostics – a portmanteau of the words “therapy” and “diagnostics” – researchers use spatial information about cancer cells in the body to come up with targeted therapies. But this approach requires fluorescent markers. Electrochemical imaging, which uses only the tissue‘s natural – or endogenous – electrochemical markers, could also provide doctors with what they need to make diagnoses and prescribe therapies. In a recent breakthrough, EPFL researchers, working with Linkou Chang Gung Memorial Hospital in Taiwan, employed a technique called scanning electrochemical microscopy to produce images of hemoglobin in a mouse’s heart.

In order to map out the distribution of biomarkers and nanomaterials in animal and human tissue, the EPFL researchers used a scanner equipped with electrochemical probes. This device, which was developed by Andreas Lesch and Tzu-En Lin in the Laboratory of Physical and Analytical Electrochemistry on EPFL’s Valais Wallis campus in Sion, has eight flexible microelectrodes that are lined up side by side. The device scans tissues immersed in an electrolyte solution in order to measure the electrochemical response. Some types of molecules and nanomaterials that have built up in the tissue exchange electrons with the electrochemical mediator in the solution, and the resulting electric currents are used by the researchers to reconstruct the image. Electrochemical imaging can also monitor the redox state of cancer cells, which is quite different from that of normal cells. It can therefore reveal if there are a large number of cancer cells and where they are located. 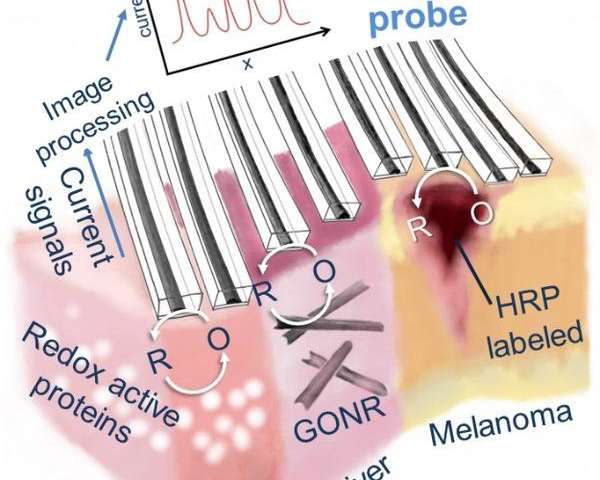 Using banana skins to study the stages of melanoma

The researchers started out by studying the typical biomarkers of melanoma, which can also be found in the black spots of overripe bananas. Taking advantage of this similarity, they were able to work on the fruit to develop an imaging technique capable of measuring tyrosinase in human skin and mapping out its distribution. An important step forward has also now been made in applying the imaging technique to thick tissues – like a biopsy of human skin – in addition to thin cross-sections of cells.

“We are perfectly capable of using electrochemistry to kill cancer cells on microscope slides and in petri dishes, but doing so in thick tissue is another story,” says Hubert Girault, who runs the Laboratory of Physical and Analytical Electrochemistry. Indeed, Professor Girault hopes that it will one day be possible to use electrochemical microscopy during surgery. He envisions a device with interconnected microelectrodes capable of producing an image that will test for tumors and then electrochemically destroying any cancerous cells found by applying a burst of voltage: “Around two volts, that’s not much, but it’s enough to generate oxygen radicals and eliminate cancer cells,” says Girault. The researchers’ findings have just been published in Angewandte Chemie International Edition.