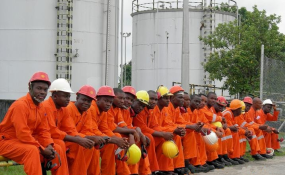 Abuja — The Nigerian National Petroleum Corporation (NNPC) has said it will build a new biofuel plant with the capacity to produce 65 million litres of biofuel annually in the Okeluse area of Ondo State.

The plant, it noted, would be sited on a 15,000-hectare land space to be provided by the state government, and upon which a special breed of cassava plantation would be cultivated to provide feedstock to the biofuel plant and animal feed production.

It explained that the corporation decided on the biofuel plant as part of its commitment to ensure unimpeded supply of petroleum products in Nigeria, as well as safeguard the environment by reducing its carbon emission and footprint.

Similarly, the project, it quoted Baru to have explained, would not be undertaken by NNPC alone, but with investors who are expected to invest in it to create at least one million direct and indirect jobs, as well as help Nigeria reduce the volume of fuel she imports annually.